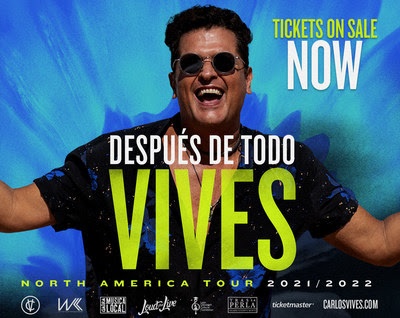 THE FIRST FULL RUN TOUR BY THE COLOMBIAN ARTIST WILL VISIT MAJOR CITIES IN THE UNITED STATES AND CANADA, STARTING DECEMBER 2021.

Tickets Go On Sale Today, Friday, June 4, at 10:00 AM Local Time Via ticketmaster.com and AXS.com

MIAMI, June 4, 2021 /PRNewswire/ — After topping digital platforms and reaching audiences globally with his song “Canción Bonita,” the multiplatinum musician, songwriter and GRAMMY® and Latin GRAMMY® award winning Carlos Vives, announces his long-awaited return to the stage with his “Después de todo… VIVES” tour, set to kick off in the United States and Canada.

“After everything we have been through, returning to North America, to so many beloved places, to see unforgettable friends and special audiences again, makes this truly a historic moment for me.” – Carlos Vives expressed.

With the reopening of entertainment venues after more than a year due to COVID, Carlos Vives will be one of the first Latin artists leading the return to the big stages and stadiums across the US and Canada.

Produced by the entertainment, marketing and media company, Loud And Live, the long-awaited Carlos Vives tour kicks off on December 3 at the FTX Arena (formerly known as the AmericanAirlines Arena) in Miami and hit major North American cities including Montreal and Toronto in Canada.

“It is an honor for us to be able to partner with an artist such as Carlos Vives, one of the most important figures in Latin music and beloved artist of our time,” said Nelson Albareda, CEO of Loud And Live.

“After months of anticipation, Loud And Live is excited to bring this experience to his fans who have been eagerly awaiting to see Vives in concert to enjoy in his repertoire of classics and newest hits and will ensure that this is a memorable experience for all,” Albareda added.

Carlos Vives, who has been characterized by his selfless work inside and outside Colombia, once again reaffirms his social commitment, donating a dollar from each ticket sold on the tour to the ” Latin GRAMMY Cultural Foundation® and another dollar to his initiative “Tras La Perla.”

Vives, has been a generous ally of the Latin GRAMMY Cultural Foundation® since its launch seven years ago.  In 2018, he joined to create the Carlos Vives Scholarship, which gave Nicolle Horbath, a voice student, the opportunity to complete a BA in Songwriting and Composition at Berklee College of Music in Boston.  She was selected by the Latin GRAMMY Cultural Foundation® Scholarship Committee from a highly competitive group of hundreds of applicants from across the Americas and the Iberian Peninsula.

“Tras La Perla” is the initiative created by Carlos Vives to actively promote the improvement of the quality of life in the city of Santa Marta and in its influential region. The Initiative is based on the cooperation and articulation of various forces that allow discovering the potential of the city and the territory, seeking balance and sustainability in all dimensions of development.

Following are the tour dates for “Después de todo… VIVES ”

Two-time GRAMMY® and fifteen-time Latin GRAMMY® winner, Carlos Vives is one of the most influential and important figures in Latin music today. As creator of a new sound influenced by the traditional sounds of the Caribbean and the northern region of Colombia, Vives’ work is inspired by the study, knowledge and dissemination of Colombian culture, identity and its complex diversity through music. In 1993, he founded the band La Provincia which celebrated musicians from remote and rural areas around the Caribbean and served as a home for new and emerging talent in contemporary music. Vives and La Provincia took Colombian culture, identity and music around the world, quickly gaining international recognition. His album Vives surpassed 2 billion streams and included the global hits “La Bicicleta” (Shakira) and “Robarte un beso” (Yatra), which have both generated a combined 2.5 billion views on YouTube. As a tireless educator and cultural ambassador of Colombia, Vives is an avid supporter of Colombian poet Rafael Pombo’s legacy, which he paid tribute to by producing a series of albums titled Pombo Musical, which were made to keep children connected to national values. In 2015, he founded Tras La Perla to promote sustainable development in the city of Santa Marta and its region influenced by the Sierra Nevada and Ciénaga Grande.

In 2016, he also created the Río Grande Music School with the purpose of offering new artistic experiences based on dialogue influenced by Colombian music, new local music proposals and music from around the world. Undoubtedly, Carlos Vives has made, and will continue to make his mark across generations through music and advocacy of his culture.

About Loud And Live

An Entertainment, Marketing, Media & Live Events Company, Loud And Live performs at the intersection of music, sports, lifestyle and content development. Headquartered in Miami with additional offices in San Francisco, Puerto Rico, Mexico and Spain, Loud And Live is driven by its passion to create engaging experiences for global audiences.

About The Latin GRAMMY Cultural Foundation

The Latin GRAMMY Cultural Foundation is a 501(c)(3) charitable organization established by The Latin Recording Academy® in 2015 to further international awareness and appreciation of the significant contributions of Latin music and its makers to the world’s culture. The Foundation provides college scholarships, educational programs and grants for the research and preservation of its rich musical legacy and heritage, and to date, has donated more than $5.7 million with the support of Latin Recording Academy’s members, artists, corporate sponsors and other generous donors. For additional information, or to make a donation, please visit latingrammyculturalfoundation.com, Amazon Smile or our Facebook page. And follow us @latingrammyfdn on Twitter and Instagram, and at Latin GRAMMY Cultural Foundation on Facebook.