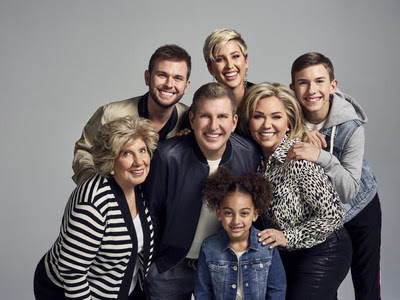 Reality Series Averages More Than 2.2 Million Viewers Across All Platforms; Most Recent Episode Was Highest Rated in More Than a Year

NEW YORK, Aug. 27, 2020 /PRNewswire/ — America can’t get enough of the Chrisleys! Since its Season 8 debut on July 9, the successful unscripted family series CHRISLEY KNOWS BEST is averaging an impressive 2.27 million viewers across platforms and has grown more than 4% over Season 7. Additionally, the most recent episode of the series, “Everlasting Todd,” which aired Thursday, August 20, was the highest rated telecast of the series in more than a year.

The show, helmed by outspoken patriarch, Todd Chrisley, continues to be USA Network’s #1 original program year-to-date in P18-49 and #1 for USA digital across key metrics. This season, Todd and the wild antics of his entire family handily beats the nearest competition, topping A&E by 19% and WE by 32% and HGTV by 70% on Thursdays at 9PM ET/PT.

On the newest episode of the show, “Let’s Talk About Sex, Grayson,” airing tonight, Thursday August 27, at 9PM ET/PT on USA, Todd’s young son Grayson is acting out in ways that are truly testing his mother Julie Chrisley. And, the ever-scheming and delightfully loveable Nanny Faye finds herself involved in a pyramid scheme.

The first half of Season 8 finales on Thursday, September 3. Past seasons are also available on VOD. Additionally, the series is now available to stream for free on Peacock, and continues to make successful additional runs on Bravo and E!.

USA Network has been a #1 cable entertainment network for 14 years, and is home to the most compelling television properties in the industry. Serving a broad, passionate fanbase, USA’s diverse slate includes popular award-winning dramas, unfiltered family comedies, buzzy unscripted, weekly live WWE programming, and a portfolio of sought-after acquired series and movies. USA is part of NBCUniversal, one of the world’s leading media and entertainment companies. NBCUniversal is a subsidiary of Comcast Corporation.