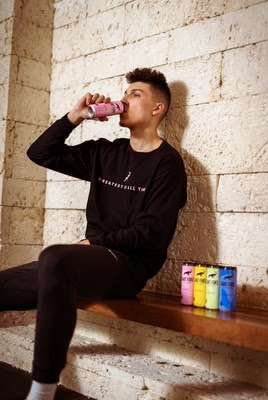 DALLAS, May 14, 2021 /PRNewswire/ — G.O.A.T. Fuel ® – a health-focused energy drink developed by NFL Hall of Famer Jerry Rice, today announces an exclusive partnership with Miami’s rising star, Tyler Herro, who will become the brand’s first ambassador. Drafted 13th overall by Miami in 2019, and referred to by fans as “Baby G.O.A.T.” due to his young age, relentless work ethic and fearless confidence, Herro embodies the G.O.A.T. Fuel ® mentality championed by the greatest NFL receiver of all time, Jerry Rice. Just as Rice shattered record after record during his show-stopping tenure in the NFL, earning him the title of THE G.O.A.T. on the gridiron, 21-year-old Herro has already shown great promise breaking records in his rookie season and is determined to be a trailblazer throughout his career.

As the first ambassador for the brand, Herro joins NFL great Rice in support of the health-forward energy drink designed to improve focus, performance, and recovery for athletes and beverage enthusiasts alike. G.O.A.T. Fuel ® is full of healthy ingredients, powered by cordyceps mushrooms, BCAAs, 10 essential vitamins, natural caffeine, and more. Herro discovered the drink last year while playing in the bubble and it quickly became a staple in his routine. Herro is often found with G.O.A.T. Fuel® in hand as the beverage helps propel his workouts and performance on the court.

Both G.O.A.T. Fuel ® founder Jerry Rice and Tyler Herro share a unique passion for competition and unparalleled determination for bettering themselves on the court or field. Herro’s big dreams and unwavering dedication to becoming the best at his craft are reminiscent of the NFL legend who is revered for the work ethic that allowed him to become unstoppable in the NFL.

“This kid is really special,” says Rice of Herro. “That look in his eye. A fearless tenacity. I loved watching him in the NBA Playoffs last year and I love his work ethic. I see a lot of intensity, drive and G.O.A.T. mentality in this young man and I’m happy to have him on board as an ambassador for G.O.A.T. Fuel.”

Herro’s appetite and potential for greatness have been evident from the start. He was voted the best shooter in the 2019 draft class by his fellow rookies and holds the record for the most 3-pointers made by a rookie in single postseason run, catching fire with 48 shots drained from beyond-the-arc. This past season, he broke a 44-year-old record for the most consecutive double digit scoring games in the playoffs by a rookie and he is the youngest player to ever start in a Finals game.

“I absolutely love G.O.A.T. Fuel, especially the Blueberry Lemonade flavor,” says Herro. “I’ve been putting in a ton of work on the court and I can always rely on G.O.A.T. Fuel to give me an extra boost and even sharper focus to play my best. It’s truly such an honor to join forces with Jerry Rice and G.O.A.T. Fuel. I hope to someday earn the same respect on the court as he did out on the field.”

G.O.A.T. Fuel ® is available in eight unique flavors and can be purchased at www.goatfuel.com as well as through the brand’s new mobile app where consumers will be able to receive an exclusive “Baby G.O.A.T.” discount.

G.O.A.T. Fuel ® (“greatest of all time”) was created by NFL Hall of Famer, Jerry Rice and his family. It is a lifestyle brand focused on bringing health-forward products and a G.O.A.T. mindset to consumers. We believe the term G.O.A.T. shouldn’t be reserved only just for athletes, but anyone striving to be great. Our energy drink has a proprietary blend of cordyceps mushrooms, 200 mg of natural caffeine, green tea with EGCG, ginger, amino acids and 10 essential vitamins. Visitwww.goatfuel.com.