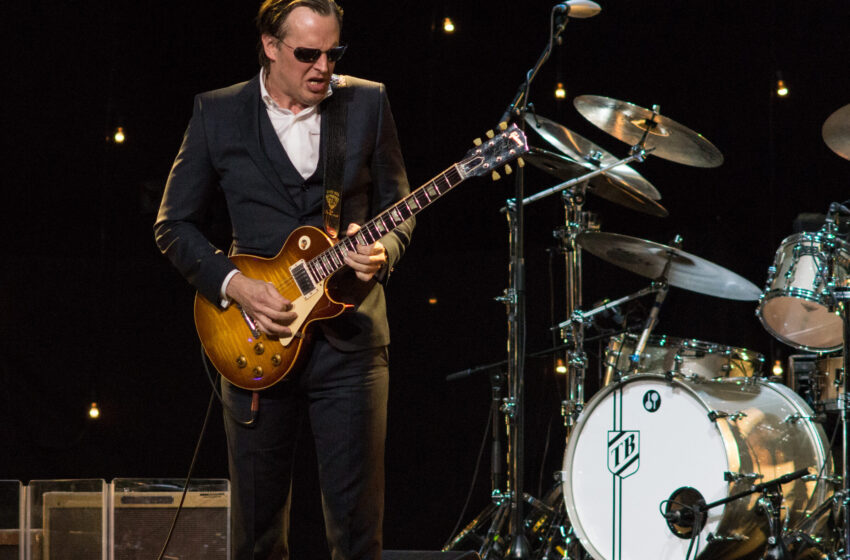 LOS ANGELES, Sept. 30, 2021 /PRNewswire/ — Two time-Grammy nominee and Blues-Rock star Joe Bonamassa announced his tour dates for Spring of 2022. The 24-date tour across the U.S., is in support of his highly anticipated upcoming album Time Clocks which is set to be released on October 29. The dates which begin February 15, in Orlando, FL, also features the return of his sold out Keeping The Blues Alive at Sea cruise from February 21-25, and ends in Washington, DC on March 21, 2022.

Joe Bonamassa’s fan Presale is currently live and the public on-sale will start on Friday at 10 am Local venue time. Tickets to Bonamassa’s Spring 2022 U.S. tour and tickets to his current 2021 Fall tour are available at http://joeb.me/JB-Tickets.

Hailed internationally as one of the greatest guitar players of his generation and cited by Guitar World Magazine as “the world’s biggest blues guitarist,” Bonamassa has almost single-handedly redefined the blues-rock genre and brought it into the mainstream. Now, with even bolder energy than ever before, Bonamassa holds the power of controlling both his artistry and his business in both hands. With 24 #1 albums, yearly sold-out tours worldwide and custom annual cruises, he’s a hard act to beat. Joe knows his worth, and albeit humble, he plans to continue to beat the odds and exceed the expectations of naysayers. This new album is a testament to his credentials and a toast to his longtime fans. It’s Joe Bonamassa at his finest, ready to rock. Bonamassa, a virtuoso on guitar, is backed by a stellar band of some of the top musicians around and is ready to bring live music back to his fans.

Time Clocks due out October 29, is a testament to his credentials and a toast to his longtime fans. His new sound has a raw and vital flavor, combined with a resolute skill that can only be gained through years of perseverance and unyielding dedication. It’s Joe Bonamassa at his finest, ready to rock. “What started out with the intention of being a trio record turned into probably my most adventurous and involved record to date,” explains Bonamassa. His longtime producer Kevin Shirley adds, “I think Joe Bonamassa has made an album that is truly transitional. From a blues musician to a superstar artist, [and] I’m so thrilled to be along for the ride.” Joe and Kevin brought on the legendary Bob Clearmountain to mix the epic tracks, and Bob declares that “This is one of the best albums I’ve mixed in years. Joe is not only one of the finest blues & rock guitarists of our time, he’s also a brilliant songwriter, [which is] impressively apparent on this record.”

For more information about tour dates and more visit www.jbonamassa.com/tour-dates

Blues-rock superstar Joe Bonamassa is one of the most celebrated performing musicians today. As a two-time GRAMMY-nominated artist who recently achieved his 24th #1 album on the Billboard Blues Chart (more than any other artist) with his last album Royal Tea, Joe is only in his early 40s and he’s already become a living legend with an astounding multi-genre catalogue of music. Joe’s highly anticipated new studio album “Time Clocks” is set to release on October 29th. Collectively, Bonamassa has over 40 albums to date, all on his own label J&R Adventures, including studio and live recordings, collaborative albums and adventurous side projects. A prolific writer who is always on the hunt to expand his eclectic musical horizons, Bonamassa has a limitless work ethic whether it’s in a studio, on the road, producing, or working with other artists to spur new music. He’s been featured in several publications from Esquire, WSJ and Parade to Rolling Stone and American Songwriter, as well as on the covers of Guitar World, Guitar Player, Vintage Guitar, Acoustic Guitar, and Classic Rock Magazine.