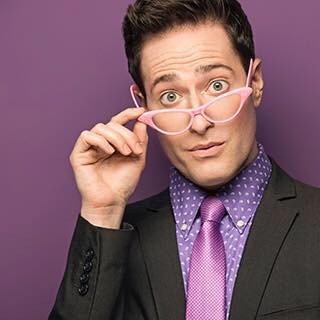 1. A Little Brains, A Little Talent

3. You Gotta Get a Gimmick (ft. Josh Gad and Sean Hayes)

6. My Best Girl/It Only Takes a Moment (ft. Bernadette Peters)

8. Lida Rose/Will I Ever Tell You?

11. Somewhere Only We Know

13. Those Were the Good Old Days (Randy’s Version)

Randy Rainbow is a three-time EMMY® nominated American comedian, producer, actor, singer, writer, and satirist known for his popular YouTube series, The Randy Rainbow Show. His musical parodies and political spoofs have garnered him worldwide acclaim and two EMMY® nominations for Outstanding Short Form Variety Series. In 2019 he landed a spot on The New York Times Best Performances list, and in 2020 he was awarded Best Parody in the Washington Post. Rainbow (yes, that’s his real name) enjoys a star-studded fan base that regularly retweets and shares his work. Some notable admirers include Ryan Reynolds, Carol Burnett, Debra Messing, John Legend, Mark Hamill, Hillary Clinton, Stephen Sondheim, Patti LuPone, Jane Lynch, Ana Navarro, Barry Manilow, Ben Stiller, Sarah Silverman, Julie Andrews, Rosie O’Donnell, Martin Short, Lin-Manuel Miranda and, Steve Martin. In 2019, Randy collaborated with TONY, GRAMMY, and EMMY®-winning composer and lyricist Marc Shaiman, on his first studio album, Hey Gurl, It’s Christmas!, which debuted at #1 on Billboard’s Comedy chart and #1 on iTunes Holiday chart. Touring the U.S. to sold-out crowds, the influencer and Internet sensation’s viral comedy videos have received hundreds of millions of views across all social media and digital platforms. His fresh take on politics and current events has led to interviews and profiles by such venerable media outlets as The Washington Post (magazine cover story), The Hollywood Reporter, CNN, NPR, ABC News, OUT, People, and Entertainment Weekly. American author and media pundit Dan Savage called him “the best thing to come from the GOP race.” In a recent article, Forbes Magazine pondered, “Why Randy Rainbow, The Muppets, and The Avengers Should Host the Oscars.” As The Washington Post noted, Randy Rainbow has found his own spotlight through the Internet, emerging as a viral sensation who dispenses musical-comedy salve for a divided nation. He is currently working on several projects, including a memoir, to be released April in 2022.

Broadway Records is the leading, Grammy® winning record label dedicated to releasing the most popular and current Broadway cast recordings, as well as preserving legacy musical theatre and theatre vocalists’ repertoire. Under the leadership of Broadway Records’ president and founder Van Dean, recent releases include: If The Fates Allow: The Hadestown Holiday Album, Lea Salonga Live In Concert with the Sydney Symphony Orchestra, Marguerite starring Cady Huffman, the Broadway star-filled Wellsongs Project, Legacy: Two Song Cycles by Ahrens and Flaherty, the Grammy® and Tony Award-winning revival of The Color Purple, the Tony Award® winning and Grammy® nominated revival of Once On This Island, the Grammy® nominated Matilda The Musical, Fiddler on the Roof (2015 revival) and My Fair Lady (2018 revival), Anastasia, Bandstand, Groundhog Day, The Lightning Thief and NBC’s television events, “The Wiz Live!” and “Peter Pan Live!”. The label’s critically-acclaimed “Live at Feinstein’s/54 Below” series features top Broadway stars including Patti LuPone, Aaron Tveit, Annaleigh Ashford, Norbert Leo Butz, Sierra Boggess, Laura Benanti, Robbie Rozelle, Adam Pascal & Anthony Rapp, Micky Dolenz, and many others. Broadway Records philanthropic endeavors also include the “Broadway For Orlando: What The World Needs Now is Love”, “We Are The World” by Broadway United and “Broadway Kids Against Bullying: I Have a Voice” music videos and From Broadway With Love benefit concerts for Sandy Hook, Orlando (Emmy Award for Sound) and Parkland. www.BroadwayRecords.com

GET SOCIAL WITH BROADWAY RECORDS: Facebook.com/BwayRecords