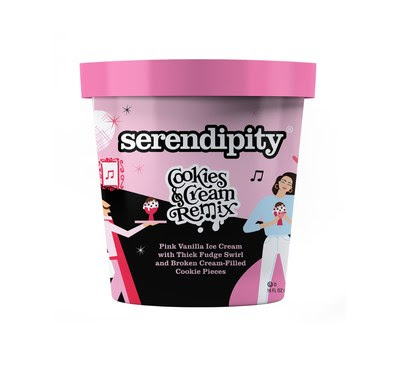 “Growing up and loving the iconic Serendipity restaurant, I couldn’t be more excited to become a partner in their expanding brand,” said Selena Gomez. “For the Cookies & Cream remix, I wanted to put my own personal spin on this classic flavor by making it with pink vanilla ice cream as a nod to my girls BLACKPINK and celebrate our new song ‘Ice Cream.'”

“Selena Gomez is the perfect partner and flavor engineer for Serendipity Brands,” said Sal Pesce, President and COO of Serendipity Brands. “As a forever fan of our brand, Selena brings a fresh perspective and a whole new set of fans to help us take over the decadent ice cream category with our innovative, indulgent mixes.”

Selling more than 145 million singles worldwide and over 25 billion global streams it’s safe to say Selena has achieved great success as a recording artist. In 2017, Gomez was named Billboard’s “Woman of the Year.” On the big screen, Selena Gomez began making the transition from young actress to adulthood with the much talked about Harmony Korine’s “Spring Breakers.” She appeared in the Academy Award nominated film “The Big Short” opposite Brad Pitt and Ryan Gosling as well as “Fundamentals of Caring” alongside Paul Rudd.  Other credits include:  “Rudderless,” “Neighbors 2” and the James Franco directed “In Dubious Battle.”  Most recently, Gomez was seen opposite Bill Murray and Adam Driver in “The Dead Don’t Die” directed by Jim Jarmusch. Selena has added executive producer to her impressive list of credits serving as an executive producer of the hit Netflix original series “13 Reasons Why.”  Gomez has used her platform to speak out on social causes throughout her career and this was evident when Gomez executive produced the critically acclaimed Netflix docu-series “Living Undocumented” which created much buzz and discussion regarding the polarizing issue of undocumented people living in the United States.  In addition, Selena serves as executive producer of the upcoming feature film “Broken Hearts Gallery” for Sony and the new HBO Max cooking show “Selena + Chef.” Gomez will return to television as a star and executive producer in the new series “Only Murders In The Building” opposite Steven Martin and Martin Short for Hulu.

Inspired by the iconic Serendipity 3 Restaurant, Serendipity Brands is a new line of super-premium and indulgent ice cream influenced by the desserts made famous by this celebrity-loved New York City restaurant. Serendipity pints offer an indulgent mix of flavors that provide an incredible taste, perfect creamy texture and a truly decadent experience in every bite. Serendipity pints are available in thirteen mouth-watering flavors. To learn more or find a retailer near you, visit www.SerendipityBrands.com and follow them on Facebook, Twitter and Instagram for news and updates.