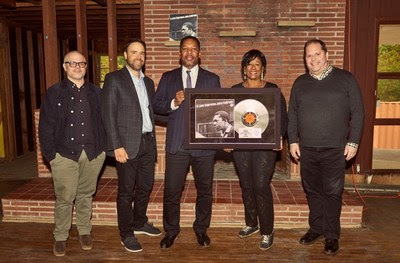 LOS ANGELES, Nov. 10, 2021 /PRNewswire/ — John Coltrane’s spiritual jazz masterpiece, A Love Supreme, has been certified platinum by the RIAA for sales of 1 million albums in the U.S. The achievement garners Coltrane his first-ever platinum record and is the first jazz album of the 1960s to receive platinum status, underscoring its enduring legacy and importance. Following weeks of writing and arranging, A Love Supreme, was recorded in one session on December 9, 1964 at Van Gelder Studios in Englewood Cliffs, New Jersey, with Coltrane’s classic quartet – pianist McCoy Tyner, bassist Jimmy Garrison, and drummer Elvin Jones – and was released on Impulse! Records, the following month, January of 1965. Composed and created by Coltrane as a “humble offering to the Divine,” it became an instant best-seller and received a GRAMMY nomination. Fifty-six years after its release, it remains one of the greatest albums ever recorded.

Last week, John and Alice Coltrane’s son and daughter, Ravi and Michelle Coltrane, were presented with a platinum plaque in honor of their father’s achievement by the head of Verve and Impulse! Records, Jamie Krents, and the label’s VP of Jazz Development, Ken Druker. The presentation took place at The John & Alice Coltrane Home in Dix Hills, Long Island, N.Y., where John Coltrane composed the four-part suite.

Ravi Coltrane, said, “We are thrilled and humbled to witness this incredible milestone in our father’s recorded legacy. I believe both John and Alice would be very proud of this achievement. We take great pride knowing new generations continue to discover this album and that the music continues to speak to their souls.”

Krents, said, “The last few years have seen a flurry of activity from the partnership of Impulse! Records, UMe and the Coltrane estate. It’s been the highest honor for our team to be the custodians of this music, beginning with the A Love Supreme: Complete Masters release in 2015 to finding and sharing unreleased gems with the found albums Both Directions At Once and Blue World, and most recently discovering and releasing A Love Supreme: Live in Seattle. It’s truly incredible to see the catalog and legacy of Mr. Coltrane not only thriving and but literally growing with the addition of these recordings. “It’s immensely gratifying for all of us at Impulse! Records to see the original A Love Supreme record achieve such an impressive sales milestone, as new generations of fans discover the most iconic musical suite in the history of jazz.”

UMe President & CEO, Bruce Resnikoff, said, “John Coltrane is one of the most important artists of the 20th century and A Love Supreme, is his masterwork. We are thrilled to celebrate this milestone and that the album continues to find new listeners more than five decades after its release.”

In celebration of the accomplishment, Impulse! Records/UMe today has released a digital-only collection titled A Love Supreme: The Platinum Collection, which brings together all commercially released versions of the most iconic suite of music in jazz. The collection begins with the original album, continues with a live 1965 recording from Antibes, France, followed by the newly released A Love Supreme: Live in Seattle, also recorded in 1965. The package ends with outtakes and alternative takes from the previously released A Love Supreme: The Complete Masters from 2015. This digital release serves as an aural history of the most lauded, yet rarely-performed, extended composition in jazz history. Stream/download here: https://JohnColtrane.lnk.to/ALSCompletePR

A Love Supreme will also be released by Supersense as one of the first titles, in their newly launched Mastercut Edition series. The incredibly limited edition, high-end release features each LP cut from the original analog source master, and not a stamper, one by one, without any digital interference, compression or compromise, in real time, with the highest possible expertise and passion. Limited to 999 units globally, this special release will feature custom packaging that has been printed and packaged by hand, includes a photo of the specific lacquer being cut, and comes with white gloves to properly handle the record, which is held in place via a screw to prevent any damage or movement. For more info or to pre-order, visit https://JohnColtrane.lnk.to/mastercutPR

The story of the A Love Supreme suite is the story of John Coltrane—his musical journey, and his spiritual path. It has become one of the most celebrated and influential recordings to come out of the jazz canon, revered and studied by musicians far beyond the jazz realm. Watch “A Love Supreme: Deep Dive,” which explores the lasting musical and historical importance of this seminal recording. Watch here: https://Impulse.lnk.to/ALSDeepDivePR

1. A Love Supreme Pt. I – Acknowledgement