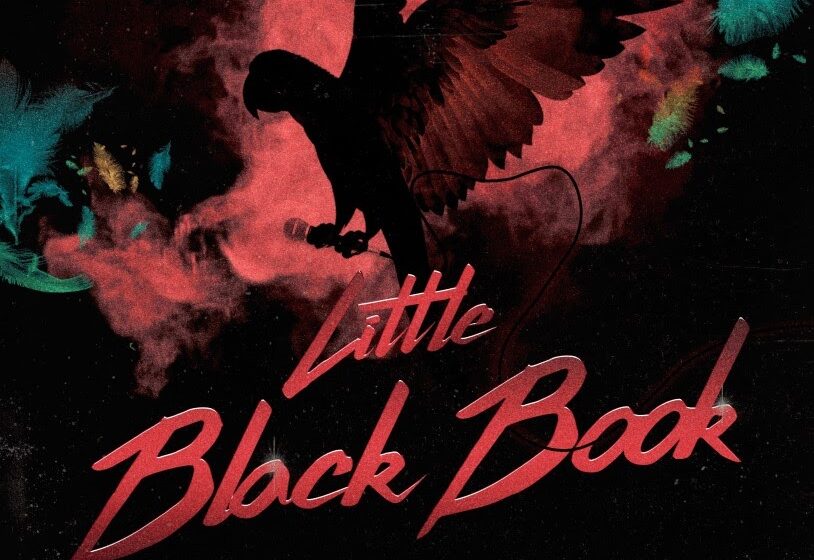 (New York, NY – Thursday, April 29th, 2021) Broadway Records announced today the CD release of the world premiere recording of LITTLE BLACK BOOK, a concept album for the new rock musical about the life and times of Heidi Fleiss, starring Alice Ripley, Orfeh, Mandy Gonzalez, Jessica Vosk, Brittney Johnson, Diana DeGarmo, Vonzell Solomon, Kuhoo Verma, Samantha Pauly, Natalie Weiss and Lillias White. With music, lyrics and book by Billy Recce, the album centers on the infamous Hollywood Madam of the 90’s who now resides in the middle of the deserts of Nevada with her forty parrots. The CD of LITTLE BLACK BOOK is available tomorrow from BroadwayRecords.com and all major music retailers including Amazon.com and BarnesandNoble.com and wherever music is sold.

On Friday MAY 7th at 4PM ET, Broadway Records will host a virtual listening party in celebration of the release of LITTLE BLACK BOOK. The party will feature the musical’s creators, writer Billy Recce and director Will Nunziata, Orchestrator/Music Producer Lloyd Kikoler, and cast members Brittney Johnson (Wicked, Beautiful), Tony nominee Orfeh (Pretty Woman, Legally Blonde), Samantha Pauly (SIX: The Musical), Kuhoo Verma (Octet), Sarah Kleist (Cleopatra), Amanda Lopez (The Marvelous Wonderettes) and Tony winner Lillias White (The Life, Dreamgirls). The team will discuss the genesis of the show, the recording of the album and the development of new Broadway bound musicals in these times, as well as answering questions from the viewing audience. The event will be hosted by Broadway Records A&R Director Robbie Rozelle and may be watched live at www.youtube.com/broadwayrecords (deep link: https://www.youtube.com/watch?v=DjKGFUE6vKg).

The digital release of LITTLE BLACK BOOK debuted at #11 on the Billboard Cast Album chart, and shot to #6 on the iTunes Soundtrack chart.

Co-conceived by Will Nunziata and Billy Recce and developed as a one-woman rock concert, Little Black Book is a sharp-tongued, raucous, and ultimately moving 90-minute ride. Through 11 pop-rock songs, the show examines a woman who was stripped of everything she worked for by a ruthless tabloid press and an unforgiving society.

Before OnlyFans and dating apps, there were madams. “Heidi Fleiss developed a brand of upscale prostitution that had not been seen before,” says composer, lyricist, book writer and co-conceiver Billy Recce. “She became a mother figure to sex workers, many of whom had been kicked out of their homes and families. She gave them guidance, safety, a roof over their heads, and by making them the most sought-after girls in Hollywood, she allowed them to feel pride in the work that they were doing.”

The golden days for Heidi Fleiss was in the early 90s. As an open secret in Hollywood, she and her girls attended all the hottest celebrity parties, drove the most expensive cars, and dated the richest and most powerful men in the world. Heidi welcomed publicity, granting select media interviews and flaunting her lavish lifestyle. “She brilliantly redefined and revolutionized the sex industry,” co-conceiver Will Nunziata reflects. “She was a girl with a dream who was vilified for being strong, opinionated, and business-savvy.”

“In LITTLE BLACK BOOK, we give her the opportunity to showcase her ‘boss lady’ qualities,” Nunziata continues. “The show also depicts the vulnerabilities of a woman who has the strength to forgive, survive, and ultimately heal. It offers a sympathetic reconciliation through a modern lens.”

While the media attention fed Heidi Fleiss’ business and power, it also brought her to the attention of the LAPD, making her an easy target. Within months, Heidi and her world would come crashing down around her while the rich and powerful men in her little black book would all go on unscathed.

“In many ways, Heidi Fleiss is an American Eva Peron,” Recce remarks. “So, while we wait for theatres to re-open, it only made sense to follow the lead of Andrew Lloyd Webber when he developed Evita and share our musical tribute to the Hollywood Madam with audiences, no matter where they are in the world, and offer a first taste of LITTLE BLACK BOOK through its songs.”

LITTLE BLACK BOOK is produced by Will Nunziata, Billy Recce, and Lloyd Kikoler, and Executive Produced by DGM Productions with Scott Humpal.

Billy Recce, one of the youngest professional songwriters in New York, is a two-time MAC and NEO-Award-winning composer/lyricist, singer/songwriter and playwright based in NY who Peter Felicia has hailed “the most promising songwriter I’ve heard in a long, long, long, long time” (BroadwayRadio). His works include the long-running A Musical About Star Wars (Off-Broadway, Cast Album on Broadway Records),and the international headline making Balloon Boy (for which he was the youngest writer ever selected for NYMF at 17. His debut album The Perks of Being A Snowflake is available on all platforms. Select media credits include BroadwayWorld’s Award-Winning sitcom Rachel Unraveled (Head Writer and Songwriter) and The Birds and the BS with Jordan Roth, co-writing songs for Mandy Patinkin, Titus Burgess, Laura Benanti, Bernadette Peters and more. He has sold out 54 Below five times with his Snowflake Jamboree series, and additionally, his work has been heard at The New Amsterdam, Broadway in Bryant Park, The Bruno Walter Auditorium/Lincoln Center, The Tilles Center, The Kennedy Center, Signature Theatre, Green Room 42, Ars Nova, The York Theatre and beyond. His social justice-based pieces have been recognized by the United Nations and he has developed works with the Orchard Project.  Member of ASCAP/Dramatists Guild. BA Playwriting, Fordham University, class of 2019.

Will Nunziata is a New York City based director of theatre, film, and television. He is the 2019 recipient of BroadwayWorld’s Best Director Award. Recently, Will directed the first NYC revival of the Tony-winning musical “Over Here” starring Tony Award winner Debbie Gravitte and Broadway stars Haley Swindal, Jessica Hendy, and Nikka Graff Lanzarone; the first NYC revival of the Kander and Ebb musical “The Act” starring Tony Award winners Randy Graff and Cady Huffman, Broadway’s Julia Murney, Karen Mason, Mamie Parris, Nikka Graff Lanzarone, Veep’s Anna Chlumsky; and conceived and directed the critically-acclaimed off-Broadway revue “Our Guy, Cy: The Songs of Cy Coleman” starring four Tony Award winners — Lillias White, Cady Huffman, Randy Graff, and Judy Kaye — all of whom worked with the late-great composer Cy Coleman. Co-conceived with and starring Tony Award winner Cady Huffman, Will co-conceived, wrote, and directed the critically-acclaimed off-Broadway run of  “Miss Peggy Lee: In Her Own Words and Music” for which he won the 2019 BroadwayWorld Award for Best Director for his work on the show. 2021-2022 upcoming projects include: “Van Gogh: A Theatrical Experience”, an original dance-play about the life and times of Vincent Van Gogh (Co-Conceiver, Co-Writer, Director); “Little Black Book”, an original pop-rock musical with book, music and lyrics by Billy Recce about the life and times of Heidi Fleiss (Co-Conceiver, Director); “A Very Irish Killing”, a dark comedy by Derek Murphy (Director); “The Witches of Broadway”, a situational television comedy written by Billy Recce (Developer, Director); “The Valley: A New Musical” by Eric Fegan and Jamie Maletz (Director); A Theatrical-Concert-Event about the life and times of Gospel Legend Duranice Pace (Co-writer, Conceiver, Director);”Tenderly: The Rosemary Clooney Musical” written by Janet Yates Vogt and Mark Friedman (Director); “Platinum Girls: The Musical” written by Andrew Beall, Russell Moss and Brad Zumwalt (Director); “Hase-Hime: A New Musical” (Co-Conceiver, Director). Will began his career in show business at 10 years old singing jingle commercials with his twin brother, Anthony (an acclaimed singer-songwriter). He went on to perform for 25 years after that with Anthony across the country and around the world with dozens of symphony orchestras eventually headlining Carnegie Hall with the New York Pops. Will graduated from Boston College with a Bachelor of Arts in Theatre and is a proud member of the Stage Directors and Choreographers Society (SDC).

Broadway Records is the leading, Grammy® winning record label dedicated to releasing the most popular and current Broadway cast recordings, as well as preserving legacy musical theatre and theatre vocalists repertoire. Under the leadership of Broadway Records’ president and founder Van Dean, recent releases include: If The Fates Allow: The Hadestown Holiday Album, Lea Salonga Live In Concert with the Sydney Symphony Orchestra, Marguerite starring Cady Huffman, the Broadway star-filled Wellsongs Project, Legacy: Two Song Cycles by Ahrens and Flaherty, Georgia On My Mind with an all-star Broadway cast, the soundstage recording of Estella Scrooge, the Grammy® and Tony Award-winning revival of The Color Purple, the Tony Award® winning and Grammy® nominated revival of Once On This Island, the Grammy® nominated Matilda The Musical, Fiddler on the Roof (2015 revival) and My Fair Lady (2018 revival), Anastasia, Bandstand, Groundhog Day, The Lightning Thief and NBC’s television events, “The Wiz Live!” and “Peter Pan Live!”. The label’s critically-acclaimed “Live at Feinstein’s/54 Below” series features top Broadway stars including Patti LuPone, Aaron Tveit, Annaleigh Ashford, Norbert Leo Butz, Sierra Boggess, Laura Benanti, Emily Skinner & Alice Ripley, Adam Pascal & Anthony Rapp, Micky Dolenz and many others. Broadway Records has partnered with the Black Theatre Coalition to create Black Writers Amplified, an album consisting entirely of new works by Black musical theatre writers, a project to immediately take steps toward significantly increased representation of Black writers in musical theatre. Black Writers Amplified will be released in 2021 and act as a resource for artistic directors, producers and other theatre creators to find and support new voices and emerging Black talent. Broadway Records philanthropic endeavors also include the “Broadway For Orlando: What The World Needs Now is Love”, “We Are The World” by Broadway United and “Broadway Kids Against Bullying: I Have a Voice” music videos and From Broadway With Love benefit concerts for Sandy Hook, Orlando (Emmy Award for Sound) and Parkland. www.BroadwayRecords.com