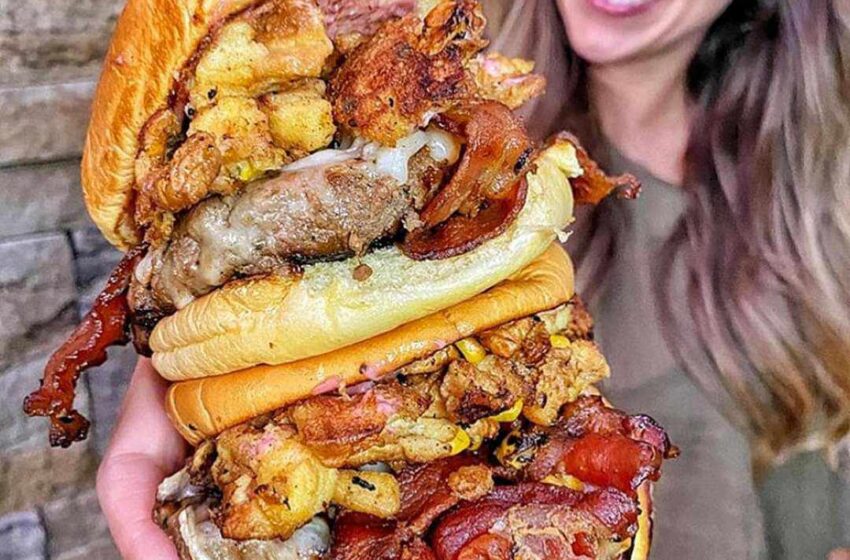 Not all burgers are the same. Many would really enjoy Black Tap’s various burgers along with fine beer, wines and large shakes. We were able to cover and attend the press preview of Black Tap NYC’s newest location at the Kirby Hotel in Herald Square located at 45 W. 35th Street.

They offer a variety of their award-winning burgers, like the Greg Norman half-pound burger of Waygu Beef, the Bison Burger, Carolina Burger with pulled pork, the Kimchi Shrimp Burger, and others. There are also vegan options and a falafel option. One can have Rudi’s gluten-free bun and Rudi’s vegan bun is also available. In addition, there a variety of chicken wings.

This new spot served as a testing kitchen for new recipes; new items including fried artichokes, and shrimp salad will be on the opening menu. We enjoyed their mainstay beer classics and their own limited-edition Black Tap brews with rotating seasonal lists and collaborations with local microbrewers. There was also a full open bar that many enjoyed.

Others tried their big CrazyShake Milkshake introduced in 2015– a shake topped with a slice of cake and cookies “glued” to the side of the rim.

The staff was very friendly and professional. Some even danced with the attendees. There is plenty of room with a 4,500-square-foot, 150-seat restaurant equipped with private event space and a milkshake display bar.

Black Tap was born in downtown New York City, Soho, in 2015. They opened their first 15-seat restaurant with one goal in mind: To serve great burgers, beers and shakes in an upbeat setting with a New York vibe all its own. Black Tap has expanded from Soho to locations in Midtown NYC, California and Vegas. Also Europe, Asia and the Middle East.

Following positive reception in Singapore, Black Tap is planning heavy expansion throughout Asia. Barish is also close to inking a new lease in Zurich. Once the new Midtown outpost opens, the restaurant will target other cities in the U.S. as well, Barish says.

Black Tap is the new take on the classic burger joint that was inspired by the old-school luncheonettes we grew up in. Black Tap burgers are only flipped once, layered with two slices of cheese, and griddled (not grilled) to medium. And they always serve it up on a potato roll with lettuce, tomato, and a pickle on the side.

Their award-winning burgers are the 3x People’s Choice award winner — NYC wine & food festival’s “burger bash.” Also, they are highly mentioned in Time Out, Zagat, and Dan’s Grill Hampton, and others. More about this fine eatery can be found at blacktap.com..