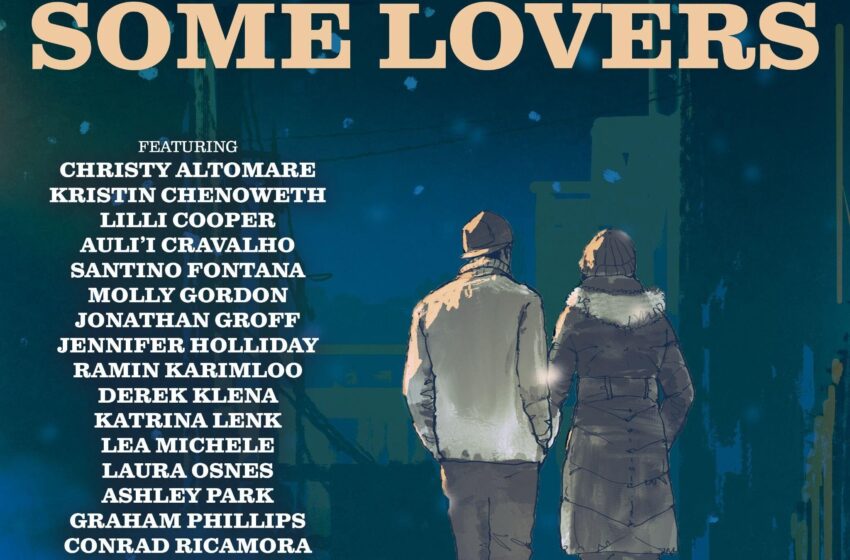 The album is available today wherever digital music is sold and on BroadwayRecords.com

3. Aren’t We? / Another Start — Ethan Slater and Lilli Cooper

4. Love Me for an Hour — Jonathan Groff and Lea Michele

5. Living with a Ghost — Katrina Lenk and Ari’el Stachel

7. A Thousand Things That Were You — Derek Klena

8. Ready to be Done with You / A Thousand Things That Were You (Reprise) — Christy Altomare and Derek Klena

9. Welcome to My World – Ramin Karimloo

10. Every Other Hour — Jennifer Holliday

Burt Bacharach and Steven Sater’s Some Lovers follows the story of a couple caught between their present and their past. With an original story and lyrics by Steven Sater and all new music from the legendary Burt Bacharach, this captivating tale leaps across time as an unforgettable melody transports these lovers back to their younger selves. Some Lovers is Burt Bacharach’s first new score for the stage since Promises, Promises in 1968. The musical has had several lives, including a premiere at The Old Globe, a concert at Lincoln Center, and a production of The Other Palace in London. This latest iteration of the piece features a handful of stage and screen costars to present the story through a concept album.

Burt Bacharach is one of the world’s most acclaimed, award-winning composers/songwriters. His music is as diverse as his audiences, spanning generations and continents, as he is celebrated both as a pop culture icon and one of the world’s greatest contemporary composers. In 1969 he wrote the score for the stage musical Promises, Promises, which had a considerable Broadway run and earned both a Tony and a Grammy Award. In the 1970s Bacharach wrote the score for the film Butch Cassidy and the Sundance Kid and won an Academy Award, with the Bacharach/David song “Raindrops Keep Fallin’ on My Head.” Bacharach and Hal David were the recipients of the 2012 Library of Congress Gershwin Prize for Popular Song. The prize is awarded to musicians whose lifetime contributions in the field of popular song exemplify the standard of excellence associated with the Gershwin’s.PROMISES, PROMISES producers Katy Lipson & Ollie Rosenblatt presented an industry-only workshop reading of SOME LOVERS  in London at Southwark Playhouse on February 17, 2017. Some Lovers also headlined at the From Page to Stage Festival from August 24-September 2, 2017 at The Other Place in London for the first time. A recipient of three Academy Awards, two Golden Globe Awards and eight Grammys (including the 2008 Lifetime Achievement Award and 1997 Trustees Award with collaborator Hal David) he revolutionized the music of the 1950s and 60s. He was inducted into the Songwriters Hall of Fame, and is the recipient of other tributes received from top music industry institutions to governments, universities and charitable and philanthropic groups.  From helping charitable organizations raise funds (“That’s What Friends Are For”), to Broadway (“Promises, Promises”), movies (“Raindrops Keep Fallin’ on My Head,” for Butch Cassidy and the Sundance Kid) to scores of new recordings of his songs each year, Bacharach’s music is always nearby.

Broadway Records is the leading, Grammy® winning record label dedicated to releasing the most popular and current Broadway cast recordings, as well as preserving legacy musical theatre and theatre vocalists repertoire. Under the leadership of Broadway Records’ president and founder Van Dean, recent releases include: If The Fates Allow: The Hadestown Holiday Album, Lea Salonga Live In Concert with the Sydney Symphony Orchestra, Breathe with an all-star cast including Tony Award-winners Kelli O’Hara and Brian Stokes Mitchell, the Broadway star-filled concept albums of In The Light, Little Black Book, In Pieces and Stone Crossed, Legacy: Two Song Cycles by Ahrens and Flaherty, Georgia On My Mind with an all-star Broadway cast, Tony Award-winning revival of The Color Purple, the Tony Award® winning and Grammy® nominated revival of Once On This Island, the Grammy® nominated Matilda The Musical, Fiddler on the Roof (2015 revival) and My Fair Lady (2018 revival), Anastasia, Bandstand, Groundhog Day, The Lightning Thief and NBC’s television events, “The Wiz Live!” and “Peter Pan Live!”. Broadway Records philanthropic endeavors also include the “Broadway For Orlando: What The World Needs Now is Love”, “We Are The World” by Broadway United and “Broadway Kids Against Bullying: I Have a Voice” music videos and From Broadway With Love benefit concerts for Sandy Hook, Orlando (Emmy Award for Sound) and Parkland. www.BroadwayRecords.com