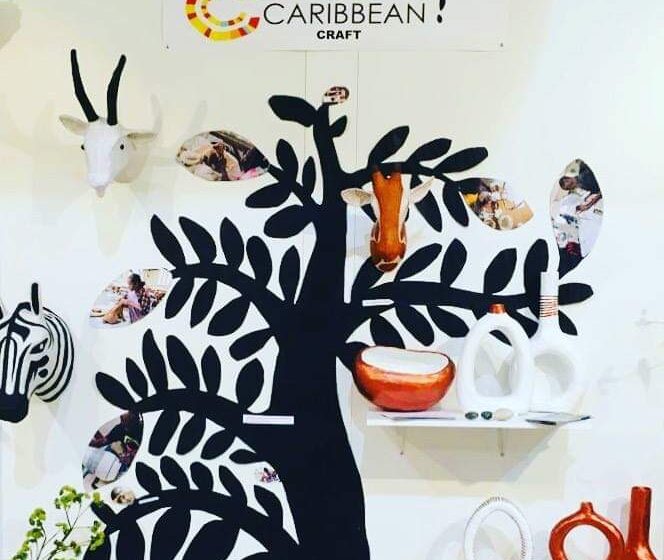 We had the chance to see interesting home decor by the talented people of Caribbean Craft at the 2020 Winter NY NOW Show at the Jacob Javits Convention Center. Here one can buy unique home decor like hand-painted items, metal sculptures, papier-mâché, stone carving, and basketry that supports the livelihood of hundreds of Haitian artisans.

Caribbean Craft, founded in 1990 in Port-au-Prince, supports Haitian artisans with fair wages, health and accident insurance, a pension system, and interest-free loans to meet their own needs when crises strike.

The company finds ecological uses for recycled material. The renowned “oil drum art” is made from recycled steel drums, and the trendy papier-mâché comes from empty cement bags and starch made from locally grown arrowroot. Their vases are made with recycled papier-mâché.

Caribbean Craft wants to generate enough sales to strengthen isolated artisan communities around Haiti. In 2010, they trained and gave work to 1,300 artisans for three months to make a papier-mâché and plastic bottle bracelet, in collaboration with World Vision. These artisans were recruited from 16 refugee camps around Port-au-Prince. Caribbean Craft is committed to providing a variety of assistance to its artisans.

They began their feeding program immediately after the earthquake in February 2010, providing a free meal per day to 25 workers. By October, the program reached 120 workers and fed over 300 artisans daily for several years. In 2011, with the help of the Clinton Foundation, West Elm, and Prodev, they started a literacy program for artisans and workers to learn to read. In 2014, they achieved their goal where all of their team knows how to read and write, whereas only 53 percent of the Haitian population is literate.

Caribbean Craft at the end of the 90s was the main provider of Haitian handicrafts for the Caribbean islands’ tourist market.

In 2006, Caribbean Craft became a female-owned company, and in 2009 was the first Haitian company to invest in a permanent showroom in Atlanta’s Americas Market.

After the earthquake, even though Caribbean Craft lost its workshop, it managed to acquire new accounts like West Elm, Restoration Hardware, TOMS Shoes, Land of Nod, and Crate & Barrel. Since 2011, their customers are the United States, Canada, France, Switzerland, Germany, Australia, Japan, Korea, Taiwan, Israel and most Caribbean Islands.

More about the company and their products can be found at caribbean-craft.com.