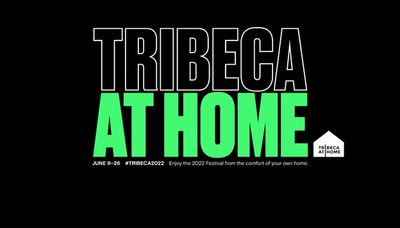 **AT HOME FESTIVAL PASSES AND TICKETS ON SALE NOW**

NEW YORK, May 6, 2022 /PRNewswire/ — The 2022 Tribeca Festival™ today launched its lineup of films for  “Tribeca at Home” – an online platform that provides festival-goers from around the country the opportunity to share and engage in the Tribeca experience. This year’s offering includes a selection of films available exclusively online for viewers through “Tribeca At Home,” as well as on Apple TV, Fire TV, and Roku, beginning June 9 through June 26.

The online premieres include exclusive screenings of documentary films: Kaepernick & America, an exploration of former NFL quarterback Colin Kaepernick‘s protest at the center of swelling racial tension in America; and Billion Dollar Babies: The True Story of the Cabbage Patch Kids, the unbelievable story of Cabbage Patch Kids and how they ushered in the Black Friday sale craze, executive produced and narrated by Neil Patrick Harris. Narrative films include God Save The Queens, featuring Justin Andrew Honard AKA Alaska Thunderfuck and Jay Jackson AKA Laganja Estranja; Nude Tuesday with Jackie van Beek and Damon Herriman; and The Courtroom starring BD Wong, Marsha Stephanie Blake, Michael Braun, Michael Chernus, and Kristin Villanueva. Additionally, there is an exclusive conversation with Academy-winning director, producer, and screenwriter Adam McKay.

U.S. audiences are able to purchase tickets to special online encore screenings of films following their live in-person premieres in New York City. Exclusive festival Q&As with the filmmakers follow many of the online screenings. As an added bonus this year, “Tribeca at Home” will be extended for a week after the Festival so fans can catch anything they missed, re-watch films, and screen Festival-winners. First introduced to audiences through the Tribeca Online Film Festival and expanded last year, the Tribeca Festival was the first festival to introduce virtual programming.

The Tribeca Festival brings artists and diverse audiences together to celebrate storytelling in all its forms, including film, TV, VR, games, music, and online work. With strong roots in independent film, Tribeca is a platform for creative expression and immersive entertainment. Tribeca champions emerging and established voices; discovers award-winning filmmakers and creators; curates innovative experiences; and introduces new technology and ideas through premieres, exhibitions, talks, and live performances.

The Festival was founded by Robert De Niro, Jane Rosenthal, and Craig Hatkoff in 2001 to spur the economic and cultural revitalization of lower Manhattan following the attacks on the World Trade Center. Tribeca will celebrate its 21st year from June 8–19, 2022.

In 2019, James Murdoch’s Lupa Systems, a private investment company with locations in New York and Mumbai, bought a majority stake in Tribeca Enterprises, bringing together Rosenthal, De Niro, and Murdoch to grow the enterprise.