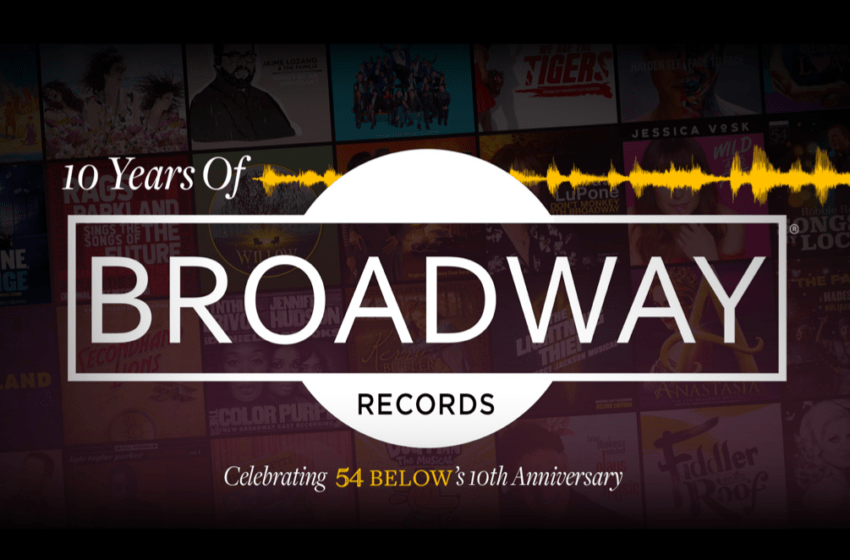 (New York, NY) Wednesday, September 21st, 2022 – Broadway Records is celebrating 10 years with the 10th anniversary of 54 Below! This one-night-only celebration concert will feature Broadway Records’ most dazzling solo and double-act artists. Features an all-star lineup, Tony Award® nominee Andy Karl and Tony Award® nominee Orfeh (7 pm only), Tony Award® winner Stephen Flaherty, Andrew Butler (RAGS PARKLAND) Bobby Conte (Company), Drew Gasparini (I Could Use a Drink, The Karate Kid), Hannah Elless (Bright Star) F Michael Haynie (Wicked, Frozen), Michael Longoria (Trading Places), Chris McCarrell (The Lightning Thief), Rob Rokicki, (Monstersongs), Analise Scarpaci (9:30 pm only) (Mrs. Doubtfire), Milly Shapiro and Bailey Ryon reuniting from Matilda, Samantha Williams (Caroline or Change), and more to be announced. This exclusive engagement will showcase favorites from Broadway Records and the 54 Below live album catalog, along with their theatrical hits commemorating 10 years of Broadway and beyond. Hosted by cabaret darling Robbie Rozelle (Songs from My Locker). Directed and produced by Grace Aki (To Free a Mockingbird) with Broadway Records. Music Direction by Yasuhiko Fukuoka, Sarah Favinger on Bass, and Kaori Yamada-Lategano on percussion. This one-night concert celebration will take place at 54 Below (254 West 54th Street) on October 3rd, 2022. There is a $45-$65 main dining room cover charge and a $25 food and beverage minimum. Tickets for the in-person concert are available at www.54Below.com. Tickets on the day of the performance after 4:00 pm are only available by calling (646) 476-3551. Link for Tickets Please note that all artists and acts are subject to change at any time.

54 Below was founded as a place for the Broadway community to celebrate Broadway performers, both established and new, who sing not only the music of Broadway and the Great American Songbook but also new material intended for Broadway and off-Broadway stages. The club features fine dining and superb scenic, lighting, and sound designs entirely imagined by Broadway designers. For performers, writers, musicians, and more, 54 Below gives opportunities to advance their craft, expand their repertoires, and develop their voices in a way that is more personal, making them stronger as artists. It gives Broadway fans an opportunity to see their favorite artists in a different way, deepening their relationship and understanding of their talent. A recipient of the 2022 Tony Honors for Excellence in the Theatre, 54 Below celebrates Broadway musicals and writers of the past and present, promoting an ongoing engagement with their work. It is also a place for innovation in musical songwriting and performance. Collaborations born at 54 Below give rise to and help develop new theatrical projects and new musicals. In addition, its popular streaming video activities and audio recordings support these activities, helping to build a new Broadway audience worldwide, both in age and geography. 54 Below is one of the most in-demand performance venues in the city, presenting over 700 shows each year. Unique in its mission, it has become an indispensable member of the Broadway ecosystem, providing a place for seasoned and emerging artists to hone their craft, try out new work, grow their fanbases, and gather as a community. The management team includes Proprietors and nine-time Tony Award-winning Broadway producers Steve Baruch, Richard Frankel, Tom Viertel, Creative and Programming Director Jennifer Ashley Tepper, and restaurant General Manager Mandisa Boxill. Located at 254 West 54th Street, the club presents live shows at 7pm and 9:30pm. Late night programming will resume in the coming months. Tickets and information at 54below.com.

54 Below is committed to the health of its performers, staff, and guests and has created a Safety Plan to ensure safe conditions along with optimum performing conditions. The new policies require that performers, production, kitchen, and dining room staff, as well as all audience members, show proof of vaccination to enter the premises. Additional information on our safety protocols can be found here.54 Below has installed improved air circulation and filtering systems as well as added plexiglass barriers between some tables. Based on CDC and New York State guidelines at the time of performance, safety protocols and seating capacity may change, and policies may be adjusted as is appropriate.

Broadway Records is the leading, Grammy® winning record label dedicated to releasing the most popular and current Broadway cast recordings, as well as preserving legacy musical theatre and theatre vocalists’ repertoire. Under the leadership of Broadway Records’ president and founder Van Dean, recent releases include the New Off-Broadway Cast Recording of ASSASSINS, the New Broadway Cast Recording of Caroline, Or Change, If The Fates Allow: The Hadestown Holiday Album, Grammy® Nominated Burt Bacharach & Stephen Sater’s Some Lovers, Grammy® Nominated Stephen Schwartz’s Snapshots, The Lehman Trilogy, Randy Rainbow’s A Little Brains, A Little Talent, Legacy: Two Song Cycles by Ahrens and Flaherty, the Grammy® and Tony Award-winning revival of The Color Purple, the Tony Award® winning and Grammy® nominated revival of Once On This Island, the Grammy® nominated Matilda The Musical, Fiddler on the Roof (2015 revival) and My Fair Lady (2018 revival), Anastasia, Bandstand, Groundhog Day, The Lightning Thief and NBC’s television events, “The Wiz Live!” and “Peter Pan Live!” as well as solo albums from Patti LuPone, Lea Salonga, Brian Stokes Mitchell, Jessica Vosk, Kyle Taylor Parker, and many more. The label’s critically-acclaimed “Live at Feinstein’s/54 Below” series features top Broadway stars including Aaron Tveit, Annaleigh Ashford, Norbert Leo Butz, Sierra Boggess, Laura Benanti, Robbie Rozelle, Adam Pascal & Anthony Rapp, Micky Dolenz, and many others. Broadway Records philanthropic endeavors also include the “Broadway For Orlando: What The World Needs Now is Love”, “We Are The World” by Broadway United and “Broadway Kids Against Bullying: I Have a Voice” music videos and From Broadway With Love benefit concerts for Sandy Hook, Orlando (Emmy Award for Sound) and Parkland. www.BroadwayRecords.com