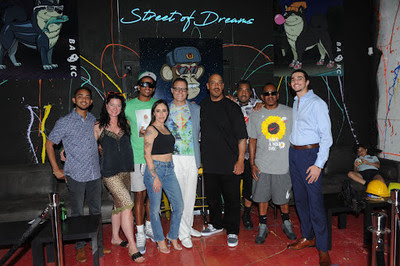 Don’t miss your chance to join the Club on June 10th!

PHOENIX, May 20, 2022 /PRNewswire/ — The Club Fomo team is excited to announce that the first-ever real-world NFT club has come to life this week with the grand opening of the Club’s first location! The Club FOMO team wanted to share this accolade with loved ones, community members, and friends alike at the first in-person event held Wednesday May 18th!

Many well-known guests were in attendance, including Cordell Broadus, Shiv Jain, and CryptoWendyO, and have already taken an early interest in Club Fomo and its future in the Web3 space.

International press also attended the heavily anticipated opening to be of the first to experience Club FOMO. The Club FOMO team spoke with reporters on their plans to expand to exclusive locations in Miami and Dubai by 2023.

Club Fomo has made it a point to shed light on NFT artists, displaying the collections of Bored Ape Yacht Club, OnChainMonkey, and other coveted NFTs owned by Founder George Gebran and team. The Phoenix space was designed by internationally renowned physical and NFT artist, Robbi Firestone, who is also Club FOMOs very own Creative Director. So far, this project has proven to be a huge success and is raising up the Phoenix art scene to bring prosperity to the beloved neighborhood.

As a private club and event space, Club FOMO revolves around an exceptional, international community of Web3-curious creators, collectors, and beyond. The renovated building will host monthly gatherings for international and local VIPs, artists, influencers, the public, and community members to purchase NFTs, seek education, and share their NFT projects and artwork. In addition, a Virtual Club FOMO will be opening in the metaverse soon!

Public mint of Street of Dreams NFTs will be live June 10th and supply will be extremely limited, so join Club FOMO’s Discord and Twitter for the latest updates on mint day and more!

Like the vision of a Phoenix rising from the ashes, a new next-gen Web3 concept is emerging – Club FOMO. In an industrial-residential area east of downtown Phoenix, a historical building has been reborn as Club FOMO. Club FOMO welcomes MVP athletes, VCs, Hollywood A-listers, Grammy winners, comedians, performers, poet laureates, and other artists in a unique, exciting setting that fosters the creation, display, and sale of NFTs.