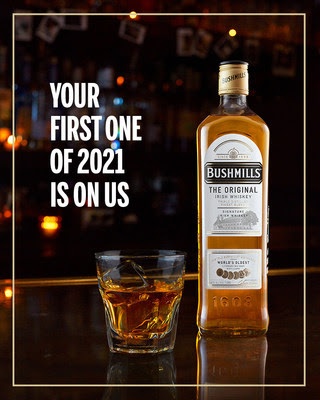 BUSHMILLS, Northern Ireland, Jan. 1, 2021 /PRNewswire/ — This new year, order a Bushmills Irish Whiskey from a favorite neighborhood pub and the beloved Irish whiskey will cover the cost. Through 400 years of history, Bushmills knows a thing or two about resilience. So, as the country looks ahead to a new year, Bushmills’ “First Whiskey of 2021” aims to send America a friendly Irish gesture to help raise spirits by covering the bill for thousands of new year toasts. No matter if ordered in person, takeaway or delivery, Bushmills wants to be the nation’s first whiskey of 2021.

To redeem this offer, whiskey lovers 21+ and over can simply buy a Bushmills Irish Whiskey pour or cocktail from a favorite local bar or restaurant, take a photo of the itemized receipt displaying the purchase of Bushmills and upload the receipt through www.Bushmills.com/FirstWhiskey. Valid receipts will receive a reimbursement of up to $6.00 (paid via Venmo, Paypal or Amazon) on purchases from January 1 through March 18, 2021 in participating U.S. states. Official terms and conditions can be found at www.Bushmills.com/FirstWhiskey.

Bushmills’ #FirstWhiskey program launches at a time when the bar and restaurant industry needs the support of its patrons. Bushmills Irish Whiskey continues to stand in solidarity with bartenders across the United States and encourages consumers to show support for their favorite local spots by participating. This program follows Bushmills’ $200,000 donation to the USBG Foundation’s Bartender Emergency Assistance Program earlier this year.  Bushmills plans to offer continued support for U.S. organizations that are providing relief to those affected by the current crisis. For more information, head to @BushmillsUSA.

*Rebate not applicable in some states. Reimbursement does not include tax or tip.