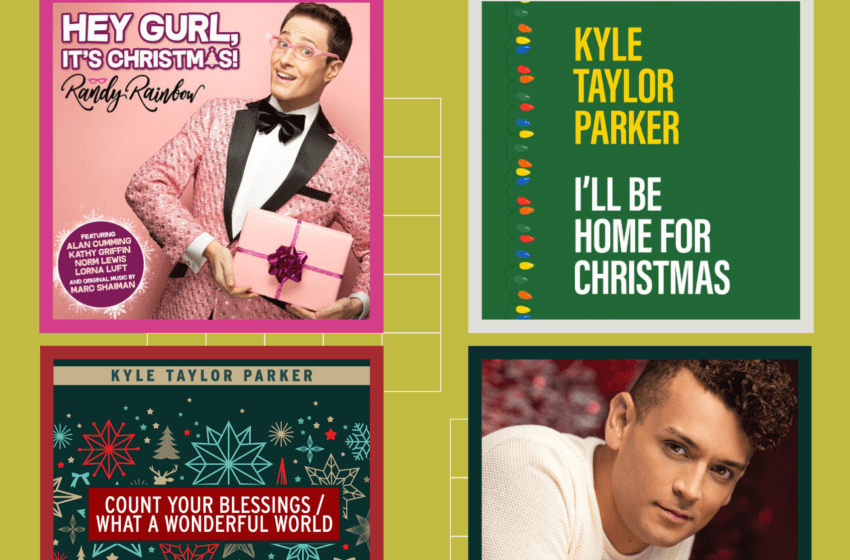 (New York, NY) December 20th, 2021 – Broadway Records is giving YOU the best of the holiday season listening with their exciting new listening guide. Whether you’re gathering safely with close friends and loved ones or enjoying a nice cup of hot cocoa at home, Broadway Records invites you to sing along with classic holiday hits by the Tony-Winning cast of the Hadestown, Three-time Emmy Nominee Randy Rainbow, Jersey Boys’ Michael Longoria, and Broadway’s Kyle Taylor Parker!

If The Fates Allow: A Hadestown Holiday Album: Featuring the cast of the Tony and Grammy Award-winning musical Hadestown, “If The Fates Allow: A Hadestown Holiday Album” offers both solace and celebration as we  head into a winter season like no other. Starring Jewelle Blackman, Yvette Gonzalez-Nacer and Kay Trinidad as “The Fates” and featuring the entire Hadestown cast, this album includes beloved holiday classics, songs composed by Hadestown’s own Anaïs Mitchell, Yvette Gonzales-Nacer, and Liam Robinson, as well as gems waiting to be rediscovered, all in a sound steeped in blues, folk, ragtime, and jazz that has made Anaïs Mitchell’s groundbreaking musical a phenomenon. This 14-track album is sure to lift your spirits and keep you livin’ it up this holiday season.

Following the release of his debut solo album, Broadway Brick By Brick, Michael Longoria sings us home for the holidays with a collection of his Christmas favorites. Merry Christmas Darling, a romantic holiday album with a throwback 60s vibe, will make you want to hang up your stocking, snuggle up by the fireplace, and get into the Christmas spirit.  Longoria’s winter wonderland love-note includes standards like “Have Yourself a Merry Little Christmas,” “Christmas (Baby Please Come Home),” weaved in with modern-day classics such as “All I Want For Christmas Is You,” and “Last Christmas.” The album features a special guest vocal from original Jersey Boys co-stars Christian Hoff, Daniel Reichard, and J. Robert Spencer (The Midtown Men) on “Little St. Nick” and the debut of an original Christmas song co-written by Michael Longoria and Rona Siddiqui called “Merry Me This Christmas.” Merry Christmas Darling is produced by Grammy nominee Michael Croiter.

Broadway Records is the leading, Grammy® winning record label dedicated to releasing the most popular and current Broadway cast recordings, as well as preserving legacy musical theatre and theatre vocalists’ repertoire. Under the leadership of Broadway Records’ president and founder Van Dean, recent releases include Caroline, or Change (2021 revival), If The Fates Allow: The Hadestown Holiday Album, Burt Bacharach & Stephen Sater’s Some Lovers, Stephen Schwartz’s Snapshots, The Lehman Trilogy, Lea Salonga Live In Concert with the Sydney Symphony Orchestra, Legacy: Two Song Cycles by Ahrens and Flaherty, the Grammy® and Tony Award-winning revival of The Color Purple, the Tony Award® winning and Grammy® nominated revival of Once On This Island, the Grammy® nominated Matilda The Musical, Fiddler on the Roof (2015 revival) and My Fair Lady (2018 revival), Anastasia, Bandstand, Groundhog Day, The Lightning Thief and NBC’s television events, “The Wiz Live!” and “Peter Pan Live!”. The label’s critically-acclaimed “Live at Feinstein’s/54 Below” series features top Broadway stars including Patti LuPone, Aaron Tveit, Annaleigh Ashford, Norbert Leo Butz, Sierra Boggess, Laura Benanti, Robbie Rozelle, Adam Pascal & Anthony Rapp, Micky Dolenz, and many others. Broadway Records philanthropic endeavors also include the “Broadway For Orlando: What The World Needs Now is Love,” “We Are The World” by Broadway United and “Broadway Kids Against Bullying: I Have a Voice” music videos and From Broadway With Love benefit concerts for Sandy Hook, Orlando (Emmy Award for Sound) and Parkland. www.BroadwayRecords.com

GET SOCIAL WITH BROADWAY RECORDS: Facebook.com/BwayRecords