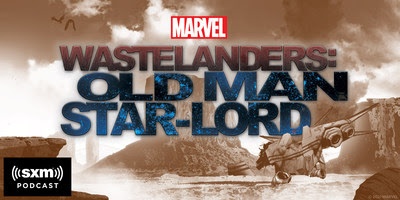 In a shadowy alternate future of the Marvel Universe, the Villains have finally won, and Heroes are nothing but a bad memory. Marvel’s Wastelanders: Old Man Star-Lord finds Peter Quill and Rocket a little paunchier, a little slower, and a lot saltier than they were during the glory days of the Guardians of the Galaxy. They quickly discover that the Earth isn’t what it used to be, either, when they crash land 30 years after Doctor Doom took over a barren, desolate wasteland and all the world’s super-villains seized control, including outlaw Ghost Riders and the bloodthirsty Kraven the Hunter. Check out the series trailer here.

“Marvel’s Wastelanders: Old Man Star-Lord is a story that throws you right into the action, antics – and danger – that fans of Star-Lord and Rocket know to expect, and the writers, cast, and crew did not hold back. We couldn’t be prouder of how this story came together,” said Stephen Wacker, Vice President and Head of Content, Marvel New Media. “This series is just the first chapter of our larger Marvel’s Wastelanders plans with SiriusXM, and Peter Quill’s story is only the tip of the iceberg for our new Marvel Audio Universe. We can’t wait to share what’s next with you all.”

Fans will also have a chance to hear from and interact with cast members and special guests in the forthcoming exclusive VIRTUAL Marvel’s Wastelanders: Old Man Star-Lord Cast Town Hall this Thursday, May 20, at 4:00 pm ET/1:00 pm PT via Zoom. Register early for your chance to ask a question during the broadcast, and tune in for some exciting behind-the-scenes details, previews, and reveals about Marvel’s Wastelanders: Old Man Star-Lord – and what comes next!

Fans can pre-register for this special Marvel event starting today at www.siriusxm.com/MarvelTownHall

SiriusXM subscribers can tune in to SiriusXM Stars (ch. 109) on May 22 and 23 to hear the Marvel’s Wastelanders: Old Man Star-Lord Cast Town Hall.

Sirius XM Holdings Inc. (NASDAQ: SIRI) is the leading audio entertainment company in North America, and the premier programmer and platform for subscription and digital advertising-supported audio products. Pandora, a subsidiary of SiriusXM, is the largest ad-supported audio entertainment streaming service in the U.S. SiriusXM’s properties, which include Pandora and leading podcast company Stitcher, reach more than 150 million listeners, the largest addressable audience in the U.S., across all categories of digital audio – music, sports, talk, and podcasts. SiriusXM’s acquisitions of Stitcher and Simplecast, alongside industry-leading ad tech company AdsWizz, make it a leader in podcast hosting, production, distribution, analytics and monetization. SiriusXM, through Sirius XM Canada Holdings, Inc., also offers satellite radio and audio entertainment in Canada. In addition to its audio entertainment businesses, SiriusXM offers connected vehicle services to automakers. For more about SiriusXM, please go to: www.siriusxm.com.

Marvel Entertainment, LLC, a wholly-owned subsidiary of The Walt Disney Company, is one of the world’s most prominent character-based entertainment companies, built on a proven library of more than 8,000 characters featured in a variety of media for over eighty years. Marvel utilizes its character franchises in entertainment, licensing, publishing, games, and digital media.