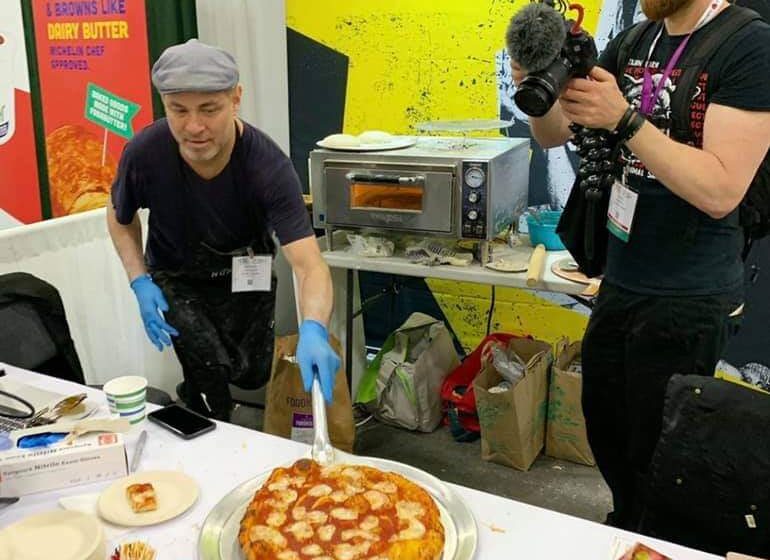 Some people are vegan, lactose intolerant, have a dairy allergy, or are just trying to eat healthier. NUMU’s new vegan mozzarella could be a better choice.

The growing plant-based foods industry has seen sales of vegan cheese skyrocket in recent years. According to Nielsen data, sales of plant-based cheese grew 41 percent through August 2018, while sales of regular dairy cheese were flat.

We had the chance to try NUMU’s cheese at the 2019 Plant Base Expo on June 7-8 at the Jacob Javits Convention Center. This product was very tasty and holds its own compared to regular mozzarella.

This plant-based food is cholesterol free. Also, it is kosher with coconut oil and they use organic Non-GMO soy beans. However, there is less protein and calcium along with more sodium being processed.

Gunars Elmuts, the co-founder, was a vegan for at least seven years before he started dabbling with recipes in his kitchen– finally landing on a mozzarella made with soy beans and coconut oil that he thought tasted and melted like the real thing.

Then he wanted to see if this would work outside his kitchen. His company made a promotional video at the famed Carroll Gardens pizzeria Lucali. Then, Elmuts felt he had something. He started making the vegan mozzarella in a commissary in Long Island City and got it on its first restaurant menu in June 2016 at Greenwich Village eatery Carroll Place.

Less than a year later, 11 restaurants are carrying NUMU and the demand has far exceeded the production capacity. Elmuts recently moved into a bigger facility near the Brooklyn Navy Yard and continues to make the cheese in small batches.

Owner Paul Giannone of Paulie Gee’s in Greenpoint has offered vegan pizzas for a few years now, but wouldn’t put any vegan mozzarella on them until he found NUMU.

The Brooklyn-based organic mozzarella brand made its official West Coast debut at the new Whole Foods Market in Burbank, CA. All pizza options, including those that offer meat, can be made vegan upon request by substituting NUMU cheese for dairy cheese and leaving off the meat.

NUMU co-founder Jill Carnegie said that food service distribution provides customers with better access to the product. She also noted that for startup brands, moving into food service may often be more efficient than retail distribution.

More about this healthy and tasty product can be found at numuvegan.com.