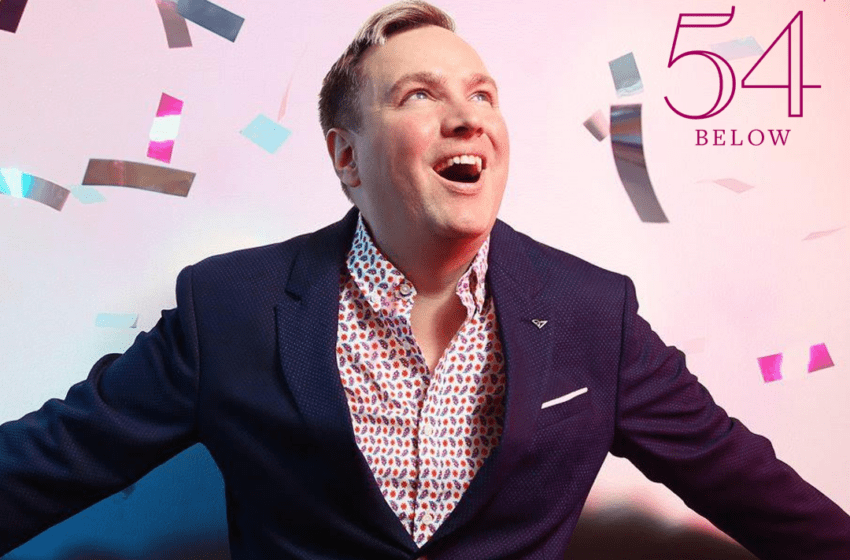 (New York, NY) Friday, June 8th, 2021- FEINSTEIN’S/54 BELOW, Broadway’s Supper Club, presents Robbie Rozelle in “Back in the Basement” on June 24 and July 14, 2021, at 9:45pm. After selling out the first evening in under thirty minutes, the much-anticipated return of the comic singer to 54 Below has added more seats and a second date.

After a very brief hiatus (and practically one year to the date of the release of his debut album “Songs From Inside My Locker: Live at Feinstein’s/54 Below”), Robbie Rozelle returns to the basement with an all-new show just for Pride. And after a year and a half of binging all of Netflix, the acclaimed entertainer has some things to say. Join Robbie and his teeny-tiny band as they celebrate life, love and living out loud in a new hilarious romp from the creator of Songs From Inside My Locker and Tuesdays at 54 that is sure to be full of his signature medleys, razor-sharp wit, and just a soupçon of snark. He just hopes his suit jacket still fits. And if it doesn’t, who cares? It’s a celebration!

“Back in the Basement” is written and performed by Robbie Rozelle, with music direction and arrangements by Yasuhiko Fukuoka. The evening will feature special guest Joseph C. Townsend.

Robbie Rozelle frequently plays to sold-out rooms across New York City. His debut solo act “Songs From Inside My Locker” was recorded live, and hailed as “easily one of the most entertaining live recordings to come out in recent memory” by BroadwayWorld. Beginning in 2019, he created and hosted “Tuesdays at 54… with Robbie Rozelle!”, which had a seven month residency at the storied venue. As a writer, director, and producer, he has frequently collaborated with Tony Award nominees Kate Baldwin and Melissa Errico, Broadway stars Nikka Graff Lanzarone, Elena Shaddow and Nathan Salstone, and for five years collaborated with Jessica Vosk on several shows, culminating in her solo album that debuted on four Billboard charts. He is the A&R Director of Broadway Records, and previously was the co-creator of Playbill Pride. www.RobbieRozelle.com @divarobbie

MORE ABOUT FEINSTEIN’S/54 BELOW

Feinstein’s/54 Below, Broadway’s Supper Club & Private Event Destination, is a performance venue in the grand tradition of New York City nightlife. A few blocks from the heart of Times Square and just below the legendary Studio 54, Feinstein’s/54 Below is a classically designed state-of-the art nightclub in the theatre district that hosts audiences with warmth and style. Feinstein’s/54 Below presents iconic and rising stars from the worlds of Broadway and popular music and has set a new standard for culinary excellence worthy of the world-class entertainment on the stage.

In their description of the venue, The New York Times writes, “Feinstein’s/54 Below has the intimacy of a large living room with unimpeded views and impeccable sound; there is not a bad seat in the house. Its sultry after-hours ambience is enhanced by brocade-patterned wall panels planted with orange-shaded lanterns. And the atmosphere is warmer and sexier than in Manhattan’s other major supper clubs.”

Located at 254 West 54th Street, Feinstein’s/54 Below features up to three shows nightly with cover charges ranging from $5-$105. 54Below.com/Feinsteins

Tags: 54 below back in the basement broadway's supper club feinstein's robbie rozelle